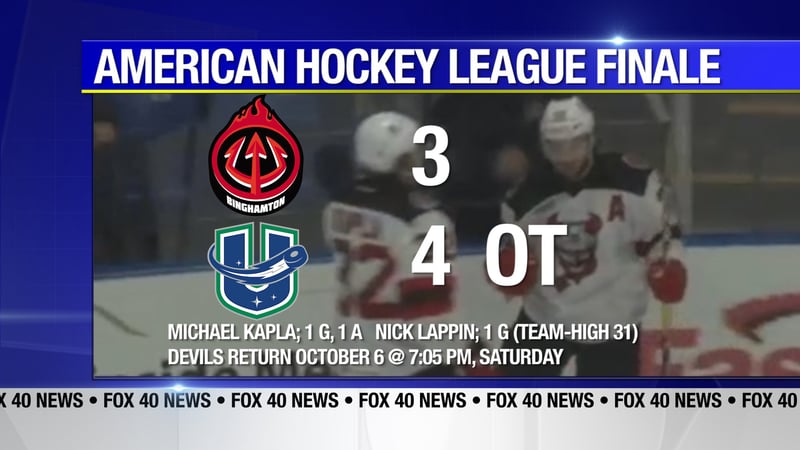 Austin Cangelosi forced overtime with a shorthanded goal in the third period in an eventual 4-3 overtime loss to the host Utica Comets at Adirondack Bank Center in the final game of the year on Sunday.

Jan Mandat started the scoring on the power play with his fourth goal of the year and third tally in the last five games. Michael Kapla sent a shot on net that Mandat deflected by goaltender Thatcher Demko for the 1-0 lead just 4:09 into the game with the other assist going to Mario Lucia.

Utica answered back to tie the game, 1-1, as Jonathan Dahlen put home his first American Hockey League goal for the Comets with assists from Jaime Sifers and Andrew Cherniwchan at 6:40 of the opening period.

Nick Lappin scored his team-leading 31st goal of the year to put the Devils back up by a single goal, 2-1. Kapla was denied in front of the net, howeber, Lappin followed up and beat Demko at 10:25 of the first period for the lead with helpers from Kapla and Brett Seney. The assist was Seney’s fifth of the year in just 12 games.

On a scramble in front of goaltender Cam Johnson’s net, the Comets pulled even for the second time of the period. Patrick Wiercioch had the final touch on the puck as it slid by the right leg pad of Johnson with just 1:46 left in the opening period. The goal was Wiercioch’s 10th of the year and the game went into the intermission tied at one with the Devils leading in shots, 10-7.

Another jam in front of the net helped the Comets take their first lead of the night on the power play early in the second period. Michael Chaput pushed the puck by the left skate of Johnson for the Comets’ first lead of the game heading into the third period. The goal was Chaput’s 17th of the year with assists Zac MacEwen and Nikolay Goldobin.

In the third period, Austin Cangelosi intercepted a drop pass while shorthanded and beat Demko over the left shoulder on a breakaway to tie the game. The goal was Cangelosi’s second of the year, unassisted, 4:31 into the final period to even the score at three.

In overtime, Lukas Jasek beat Johnson from the right wing circle for the Comets’ victory, 4-3.