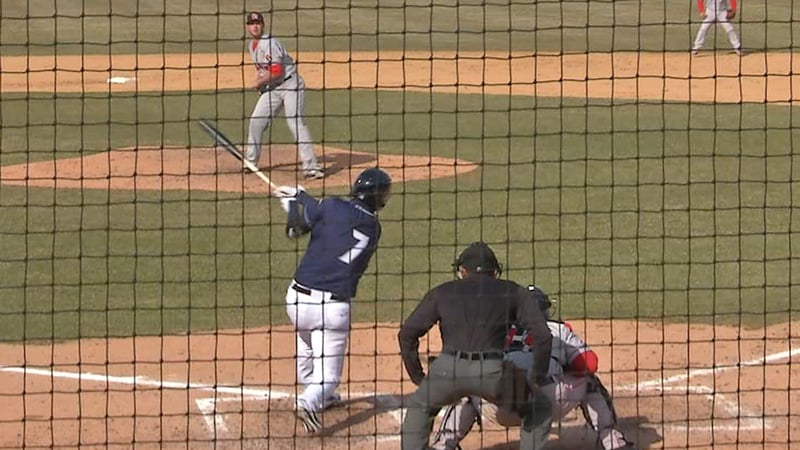 The Binghamton Rumble Ponies scored four runs in the fifth inning, highlighted by a bases-clearing double by Tomas Nido, in a 5-3 victory over the Portland Sea Dogs on Saturday afternoon at NYSEG Stadium. Binghamton relievers Eric Hanhold and Tyler Bashlor retired all eleven Sea Dogs they faced to secure Binghamton’s second straight win.

After Peter Alonso tied the game at two with an RBI double against Portland starter Dedgar Jimenez in the fifth, the Sea Dogs dipped into pen. Southpaw Daniel McGrath plunked Patrick Mazeika to fill the bases for Nido. The Rumble Ponies catcher zipped the first pitch he saw to the warning track to give the Rumble Ponies the lead for good.

Binghamton’s bullpen made the lead the stick. Hanhold capped 1-2/3 innings perfect innings of relief with a spotless sixth and Tyler Bashlor set down all six batters he faced. Corey Taylor surrendered a run in the ninth, but earned his first save of the season.

The Rumble Ponies had to play catchup after Portland jumped on the board against Andrew Church. Josh Tobias launched a solo home run in the second before Esteban Quiroz added a solo shot in the third. Hanhold took over in the fifth and stranded two runners before the Ponies grabbed the lead in the fifth.

Church struck out six and allowed two runs on six hits over 4-1/3 innings in the no-decision. Hanhold collected the victory in his Double-A debut.

Binghamton (2-0) conclude their season-opening series against the Sea Dogs on Sunday at 2:05 PM. RHP Nabil Crismatt takes the hill against RHP Mike Shawaryn. The Horizons Federal Credit Union pregame show starts at 1:50 PM and can be heard on NewsRadio 1290 WNBF and the Binghamton Rumble Ponies channel on TuneIn.

POSTGAME NOTES: The Rumble Ponies bullpen has allowed one run in their first combined 7.2 innings pitched…Binghamton handed Dedgar Jimenez his first loss since June 28, 2017…the Rumble Ponies have started the season 2-0 for the second straight year.