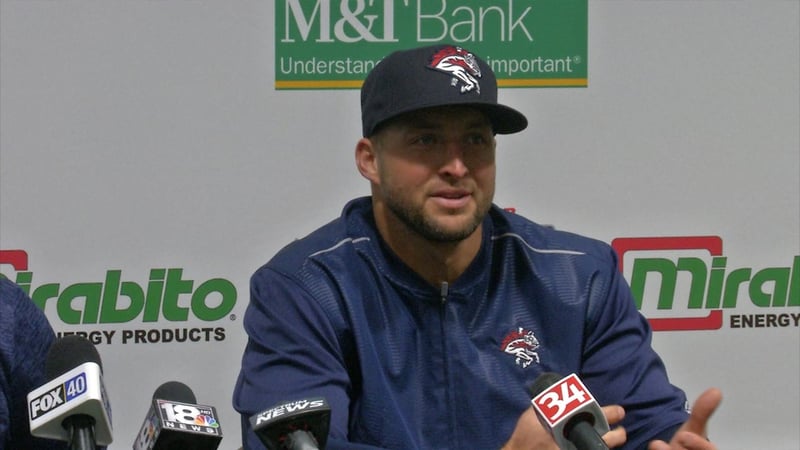 The Binghamton Rumble Ponies hosted the Portland Sea dogs in their home opener tonight, but it was Tim Tebow who immediately stole the show.

Thousands of fans walked through the gates of NYSEG stadium today, 5,247 fans to be exact, which was the second-largest home opener crowd in Binghamton history. The question is, was it for the Rumble Ponies or simply Tim Tebow? Either way it really impacted their game. "Something our team really fed on today was the energy, the energy from each other, from the fans." Stated Tebow. But, Tebow certainty gave the fans energy as well, doing what every fan was hoping he would do.

First pitch of the night for Tebow, his first at bat as a Rumble Ponie and it's a shot into right field fora 3 run homer. Advancing their lead to 5-0. As exciting as it was for us fans, the Heisman trophy winner is used to putting on a show right away. When playing for St. Lucie, Columbia and the New York Mets, he hit home-runs for all of his first at bats and now did the same thing here in Binghamton, pretty impressive.

Rumble Ponies Manager Luis Rojas was also impressed with his outfielder. "I told him that it was impressive, I'm glad you started the season this way I said to him, and the first thing he did was look at me and he said, thank god." Stated Rojas. But, as usual Tebow doesn't want to get to high and become unfocused. "it's pretty special and it feels very good." Tebow said smiling. "It's a great day and it was a fun day, but it's just one day. We've got to be focused on the next day." Stated Tebow.

But, number 15 wasn't the only one to make a big impact on tonight's game. It was cold, but the Ponie's bats were on fire, Peter Alonso put the Ponies on the board with his two run homer. After, Tim Tebow's home-run put them at a 5-0 lead and it was Jeff Mcneil who sealed the deal with his solo home run with six runs, where they would stay.

On the defensive side of the game, it was starting pitcher Drew Gagnon who pitched outstanding for Binghamton. Gagnon did not let up any runs, threw five strike-outs and only allowed two hits before Austin McGeorge came in during the sixth inning.

It was an all in all great night to be part of the Binghamton community. The Rumple Ponies defeated the Portland Sea Dogs 6-0.