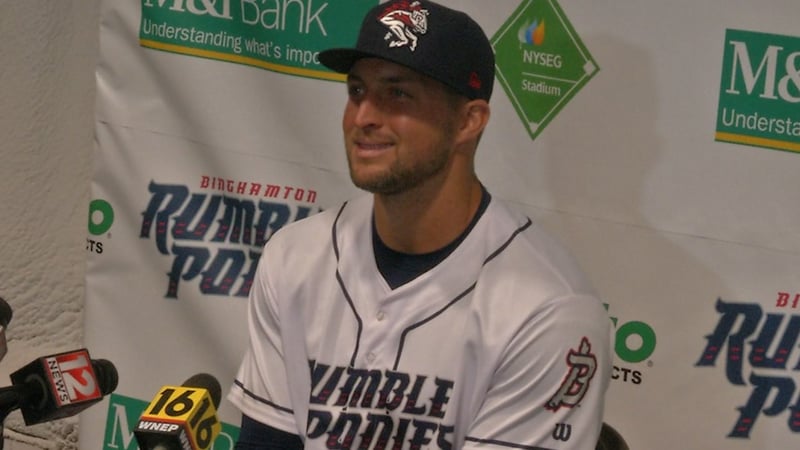 The Rumble Ponies annual preseason media day took place today and with a different year, comes a different craze and this year it was Tim Tebow.

The Rumble Ponies practiced outside only for a short amount of time due to the weather, therefore, the majority of the practice consisted of ground balls and hitting in the batting tunnel at NYSEG stadium. But, with the season being right around the corner, the players and coaches have a good idea of what this season is going to entail.

"The possibilities are endless with this team, I mean we look around and we look at the roster of this team and I think we all got along fine the last few days, which has only been the time we've had together, but we've already formed some bonds, so we're excited moving forward." Stated Tyler Moore.

Head coach Luis Rojas, who is in his second season with the Rumble Ponies stated, "having so many good arms in the bullpen, having all those weapons, man, I'm really excited and I'm glad I'm on this side, having those guys with us."

Although everyone has been super excited about Tim Tebow coming to Binghamton and being a Rumble Ponie, Tebow is especially excited for the experience and what he can teach these players and what they can teach him. Tebow stated, "Alot of these guys are young but they've been playing baseball for a long time and that relationship is helpful because I can bring a lot of experience about life and highs and lows and media and fans and craziness and some of the things I've been through that they haven't and they've also been through a lot more baseball experiences than I have and I can learn from them as well and I think that's important, learning our strengths and weakness's and how we can learn from each other."

But, not only is Tim Tebow playing here excellent for the community, it's also good for the players who are excited to play in front of a large crowd. Catcher Tomas Nido stated, "it's good that he's here because he's going to bring out a bigger crowd and he's a great guy, so we enjoy having him around and being apart of the same team, so we're all really excited, it keeps you going and keeps the adrenaline going when you go out there and perform, it's good, more people know you."