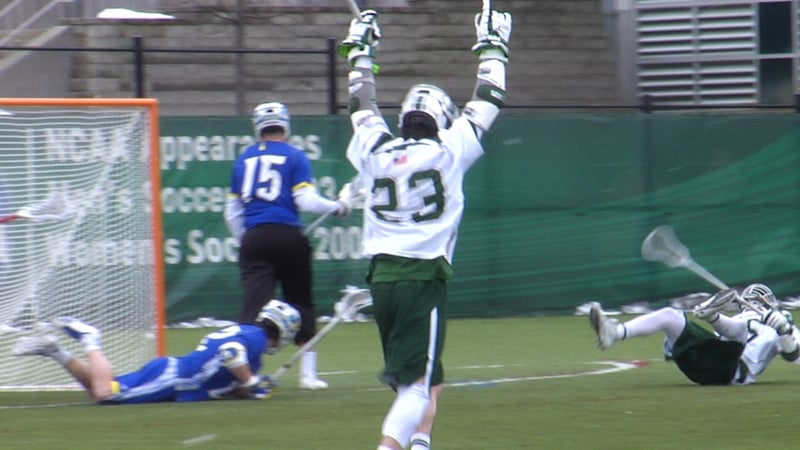 Sean Gilroy netted the game winner en route to posting his first career hat trick. Gilroy scored with 1:57 remaining in the second overtime on a pass from Joe Licata to give Binghamton their first win of the season.

"We talked a lot this week about it being our decision to dictate how we want to play," said head coach Kevin McKeown. "In the past few games we haven't done that but today we came out and competed as a team. We had 40 guys that were all in it together and we played hard and smart today."

In the first period, Delaware got out to a 2-0 start early. Sean Gilroy answered netting two goals for Binghamton ending the period tied 2-2.

Sean Makar  scored first in the second period. Makar netted an unassisted goal for Binghamton  at 13:25. Delaware scored a minute later to send the team into half time knotted at three goals each.

Delaware scored three straight goals to start the second half  and take a 6-3 lead over Binghamton. Stephen Petrelli scored on a pass from William Talbott-Shere with 2:25 remaining and Joe Licata found the back of the net on a pass from Griffin Konen to put the Bearcats within one goal of the Blue Hens at the end of the third period.

The Blue Hens scored 30 seconds into the fourth period to increase their lead to 7-5. Will Talbott-Shere took over for Binghamton scoring an unassisted goal with 8:15 remaining and then scoring again with 14 seconds left to send the game into overtime.

In the first overtime, Delaware won the  faceoff. The Blue Hens were able to get a shot off but Kevin Carbone came up with a big save and ground ball to give Binghamton possession with two minutes remaining. Binghamton turned over the ball on the offensive side of the field and Delaware controlled possession once again. Sal Fama caused a turnover to give Binghamton back the ball as time ran out in the first overtime.

Delaware again won the opening faceoff in the second overtime. The Blue Hens took a wide shot and Tom Galgano got to the ball first giving Binghamton the ball. Joe Licata dodged a defender and passed to Sean Gilroy who found the top right corner of the goal to score and give Binghamton the victory. 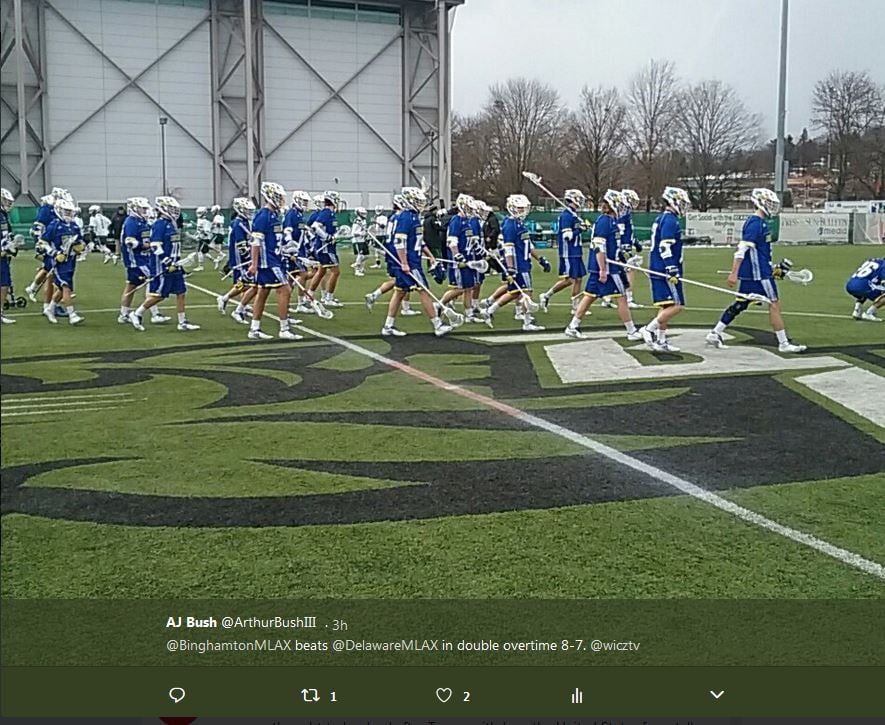 Binghamton is back in action next Saturday when they host UMass Lowell to open conference play. The game is scheduled for 1 p.m.