Devils' success continues against the Senators 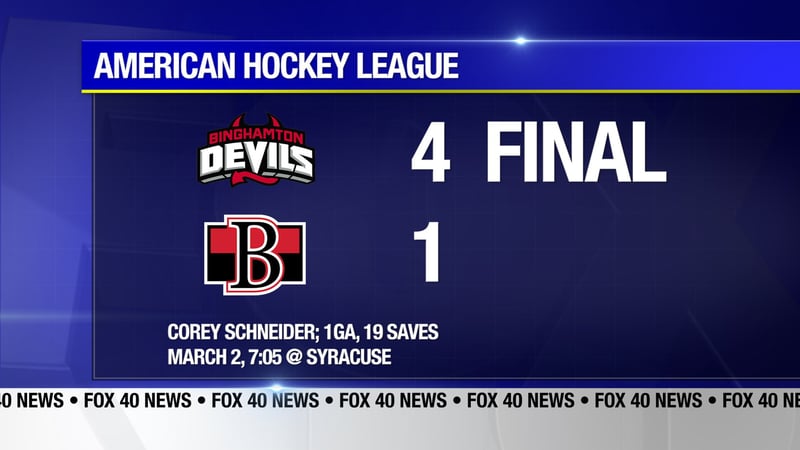 Cory Schneider stopped 19 shots and Christoph Bertschy picked up the game winner as the Binghamton Devils defeated the Belleville Senators at Yardmen Arena on Tuesday night, 4-1.

Nick Lappin scored his team-leading 19th of the year to give the Devils a 1-0 lead after one period. Jacob MacDonald made a great play to hold the puck inside the offensive zone and fed Lappin on the left wing wall. Lappin skated to the high slot and fired a low shot through traffic that beat goaltender Danny Taylor under the leg pads. The goal came at 13:34 with assists from MacDonald and Kevin Rooney and the Devils led 1-0 with a Senators’ 8-5 shot advantage through 20 minutes.

Filip Chlapik fired a slap shot by the blocker of Cory Schneider to tie the game at one. Maxime Lajoie sent the puck to the right circle where Chlapik let a one timer go for his eighth of the year at 5:02 of the second with assists from Lajoie and Jack Rodewald.

Binghamton answered back on the power play to take the lead back 16:08 into the second period. Tim Kennedy sent a cross-ice pass to Christoph Bertschy who lifted the puck over the glove of Taylor for the 2-1 lead. The goal was Bertschy’s 11th of the year from Kennedy and MacDonald for the 2-1 lead after two periods. The Devils also took a 16-15 shot advantage into the final period of play.

Michael Kapla put the Devils up 3-1 from the left circle as he sent a shot by the glove of Taylor at 7:14 of the final frame for his fifth of the year. Kapla’s goal was assisted by Jake Walman and Kennedy for the two-goal advantage.

Blake Pietila added an empty netter for the 4-1 victory. Schneider stopped 19 in the win while Taylor denied 21 in the loss.

The Binghamton Devils are back home Sunday, March 4 at 5:05 p.m. against the Utica Comets. Celebrate Dr. Seuss’ Birthday by bringing a children’s book to the office prior to the game for a special $5 kid’s ticket! For more information, call the Devils’ front office at 607-722-7367 for more information.