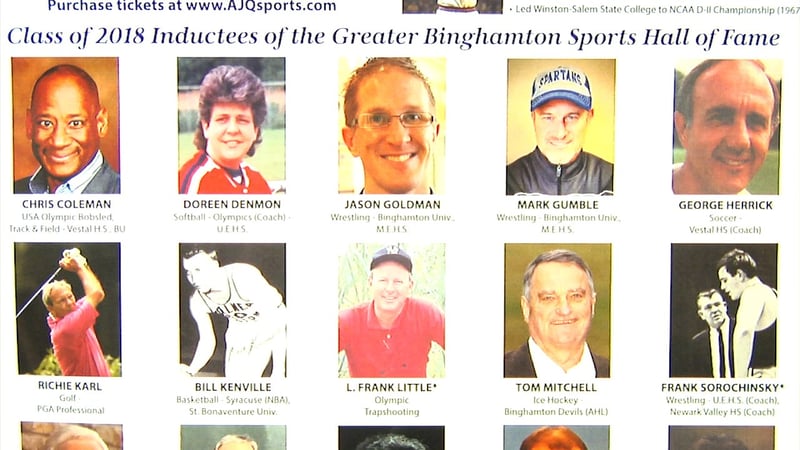 Since 2015, 39 athletes, coaches and sports affiliates have been inducted into the Greater Binghamton Sports Hall of Fame (GBSHF). Thursday, 15 more names have been added to local sports immortality.

Included in the Greater Binghamton Sports Hall of Fame's Class of 2018:

* Denotes a Posthumous Award given to the recipient's family

An award ceremony dinner will be held Monday, April 23 at 5:30 p.m, inside the Double Tree by Hilton. Included with the ceremony, a silent auction will take place to benefit the Boys & Girls Club of Western Broome, and to help establish a permanent location for the Greater Binghamton Sports Hall of Fame, which is currently on display inside the Oakdale Mall.

Previously, each induction ceremony featured a special guest speaker to begin the festivities. Chris Snee, New York Giants Offensive Lineman, first opened the awards in 2015, but in 2018 the keynote speaker will be Earl "the Pearl" Monroe, NY Knicks Basketball Legend who won an NBA championship in 1973.

And although this year's induction will forever commemorate the achievements held by the men and women selected for enshrinement, GBSHF officials said the key motive for remembering the lives of our local sports is the next generation. Giving young men and women the hope that anyone can reach greatness, even right here in the Southern Tier.

"Young people, coming up, they may not know back when what some of these great people have done. So we're trying to showcase it and remember the past, the great heritage we have here in sports," said Anthony Quagliata, GBSHF Founder.

A new involvement the Hall of Fame began this year, two student athletes (one male/one female) will be awarded $1,000 each for their athletic achievements, academic credentials and extra-curricular involvement. The Female Award is named in honor of John W. Fox, former Sports Columnist for the Press & Sun, while the Male Award is named in honor of John B. Caveny, who's idea helped found the honoring of local sports legends.

For event tickets and more information on the Greater Binghamton Sports Hall of Fame click here.