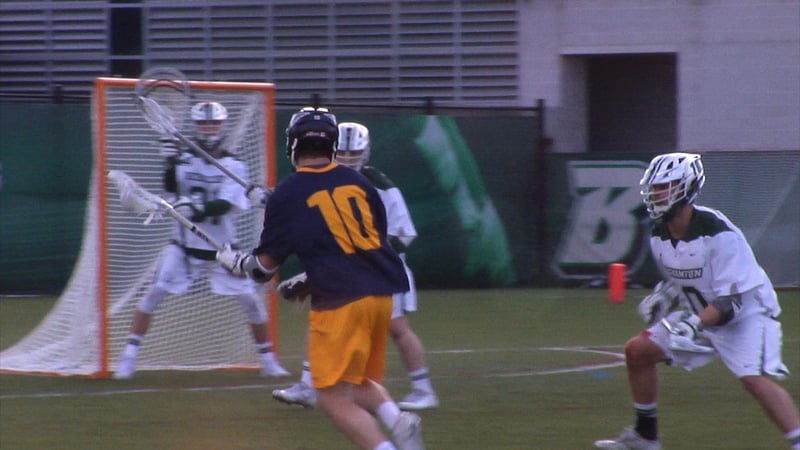 The Binghamton men's lacrosse team (0-3) lost to Canisius (1-1), 12-10, on Tuesday afternoon. The contest marked Binghamton's first game of the season at the Bearcats Sports Complex.

"I though we took some steps at times today," said head coach Kevin McKeown. "Our second half, we had some untimely turnovers and they did a good job of pushing in transition to get some easier goals. They have some dangerous weapons, who finished well today. We're disappointed but we need to use this as another opportunity to move forward and get ready for Marist on Sunday."

The Bearcats outshot the Golden Griffs 37-31 and Binghamton won 18 of 25 faceoffs.

Canisius got on the board first, netting the first goal of the game two minutes in. Freshman William Talbott-Shere quickly answered for the Bearcats scoring an unassisted goal at 10:07. Canisius took advantage of a man-up opportunity and scored to take a 2-1 lead but Binghamton ended the first period scoring two goals to close out the period with a 3-2 advantage. Thomas McAndrew found the back of the net on a pass from Liam Reaume at 5:17 and Sean Gilroy scored an unassisted goal with three minutes left in the first.

Binghamton scored the first three goals of the second period. Joe Licata netted his first goal of the season at 13:55, Stephen Petrelli scored and then assisted Sean Quigley on his first career goal to put Binghamton up 6-2. Canisius found the back of the net one minute later but Stephen Petrelli had the answer for the Bearcats. He scored his third goal of the game with 4:54 remaining in the first half. Canisius then went on to score two straight goals before halftime. The Bearcats entered halftime with 8-6 advantage.

In the third, Canisius came out firing - scoring three straight goals to take a one point lead. Sean Makar tied the game at 2:22 netting an unassisted goal.

Petrelli scored his fourth goal of the game and eighth of the season to kick off the fourth period to give Binghamton a 10-9 lead. But Canisius controlled the last seven minutes of the game, scoring three goals to win the game, 10-12.

Binghamton travels to Marist on Sunday for a 1 p.m. matchup with the Red Foxes.