Senators return to Binghamton, dousing the Devils in shootout 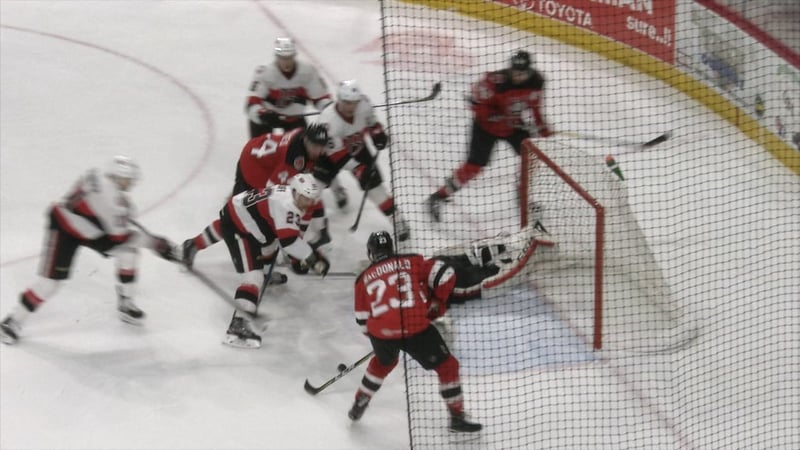 Steven Santini scored in his Binghamton Devils debut but the visiting Belleville Senators left with a 3-2 shootout victory in front of 3,640 fans at Floyd L. Maines Veterans Memorial Arena on Friday night.

Steven Santini made an immediate impact to give the Devils a 1-0 lead 14:00 into the game. Santini took Bracken Kearns’ pass and sent a shot on net that beat goaltender Danny Taylor for the one-goal lead. The goal was Santini’s first of the year assisted by Kearns and Tim Kennedy.

Belleville responded on the power play late in the first. Ben Harpur fired a shot on net that Nick Paul deflected by goaltender Eddie Lack to tie the game. The goal was Paul’s fourth of the year at 15:37 with helpers from Harpur and Filip Chlapik. The game was even at one after one period with the Devils holding a 15-11 shot advantage.

Jacob MacDonald put the Devils back out front on the power play in the second period. MacDonald punched in a loose puck at the top of the crease with assists from Jimmy Hayes and Kearns. The goal was MacDonald’s 13th of the year and team-leading 33rd point for the 2-1 advantage at 14:29. MacDonald also leads American Hockey League defensemen with eight power-play tallies. Binghamton took a one-goal lead into the final frame.

Ethan Werek tied the game for the Senators early in the third period as he sent a shot through traffic and by Lack for his first of the year. Werek’s goal was unassisted at 3:02 and eventually forced overtime.

After no scoring in overtime, Ethan Werek ended the shootout with a fourth-round goal and a Taylor save on Kevin Rooney for the 3-2 win.

The Binghamton Devils return home tomorrow night against the Rochester Americans at 7:05 p.m.  It’s the annual Broome Sports Foundation Memorabilia Auction and bring your own skates for a FREE skate with the Devils after the game! For more information, call the Devils’ front office at 607-722-7367 for more information.