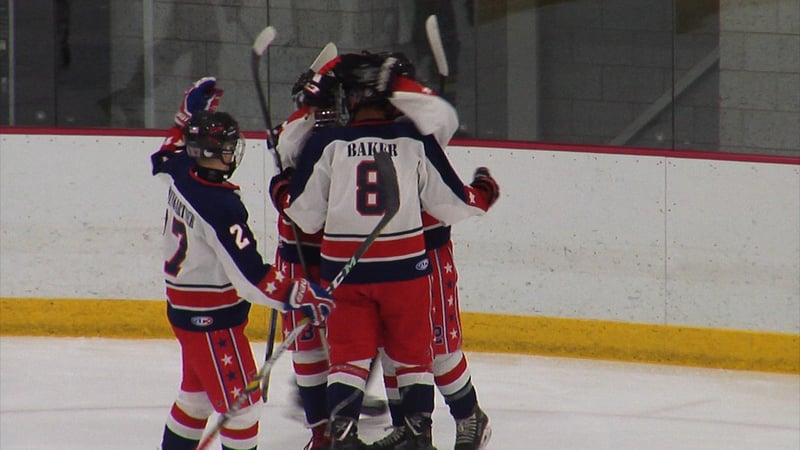 Six teams took to the ice, Sunday, at the SUNY Broome Ice Center. Competing for goals and groceries, each high school helped donate non-perishable goods for CHOW prior to their games.

Taking the rink first, #1 ranked, Elmira-Horseheads' Express faced off against, tied for #2, Vestal's Golden Bears. Early on, it was the Express that proved dominant grabbing a three goal lead. But thanks to the Golden Bears Derek Avery's two third period goals, Vestal was able to tie it up and score the go ahead goal. The Golden Bears handed the Express their third loss of the season, 4-3.

The second match-up of the night, #2 ranked, Binghamton Patriots hosted the win-less Union-Endicott Tigers. Patriot's Zach Cerinetti was the shining star of the game, scoring a goal and grabbing a couple of assists, and helping his team keep the Tigers from claiming their first win, 9-6 Binghamton won.

Finishing the night cap, Johnson City Wildcats and Chenango Valley Warriors looked to climb up the rankings. To say this game was physical, would be an understatement. Multiple penalties plagued both hockey teams, as the Wildcats, at one point, found four players inside the penalty box.

But penalties or not, Wildcats' Cody Malyszek was able to get the goals flowing as he found the back of the net (15:30) in the first and (7:35) second periods, to help his team score a shorthanded goal and beat the Warriors by a score of 4-2.

Vestal High School won the CHOW Challenge, amassing the most amount of non-perishable items. They won free ice-time and a celebration for their efforts.