Devils drop a close one to Laval, 3-1 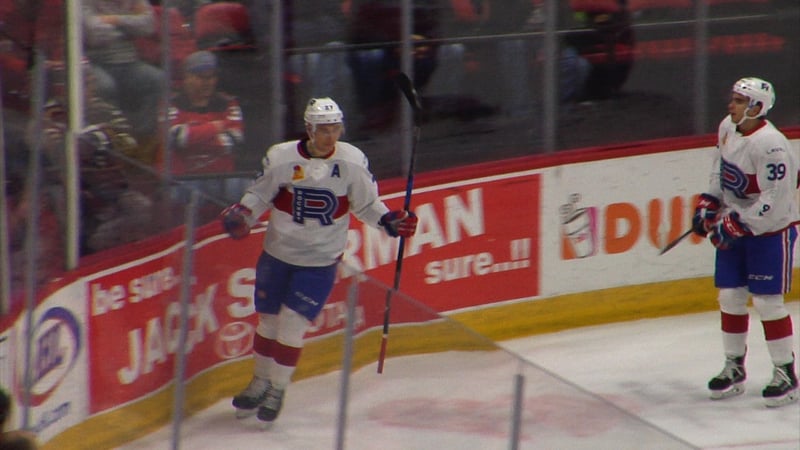 The Binghamton Devils were unable to continue the momentum as the visiting Laval Rocket came away with the 3-1 win on Saturday night at Floyd L. Maines Veterans Memorial Arena.

Laval took an early lead as Jordan Boucher roofed his fifth goal of the year for the 1-0 advantage. Boucher took the puck and moved down the left wing and let a hard shot go from inside the circle that sailed over the shoulder of goaltender Eddie Lack. Boucher’s opening goal was assisted by Chris Terry and Tom Parisi and the Rocket too the 1-0 lead into the intermission with the Devils leading in shots, 15-8.

Late in the second period the Rocket moved out to a 2-0 lead with an unassisted goal by Adam Cracknell. With time winding down, Cracknell moved down the ice and lifted a backhand shot top shelf on Lack for the two-goal advantage with his tenth of the year, unassisted. The goal came with just 1:15 left in the period and the Rocket took a 2-0 lead into the third with a 21-19 shot advantage.

Blake Pietila pulled the Devils within a goal late in the third period with his sixth of the year with 3:31 left in the game. Pietila’s goal was assisted by Yaroslav Dyblenko and John Quenneville but wasn’t enough as Daniel Audette dished in an empty-net goal for the 3-1 victory.

The Binghamton Devils return home Wednesday for Career Fair Night. Bring your resume to the Career Fair at the Arena from 2:00 p.m. – 5:00 p.m. and get two FREE tickets to that night’s game against Syracuse at 7:05 p.m. Call the Devils’ front office at 607-733-7367 for more information.