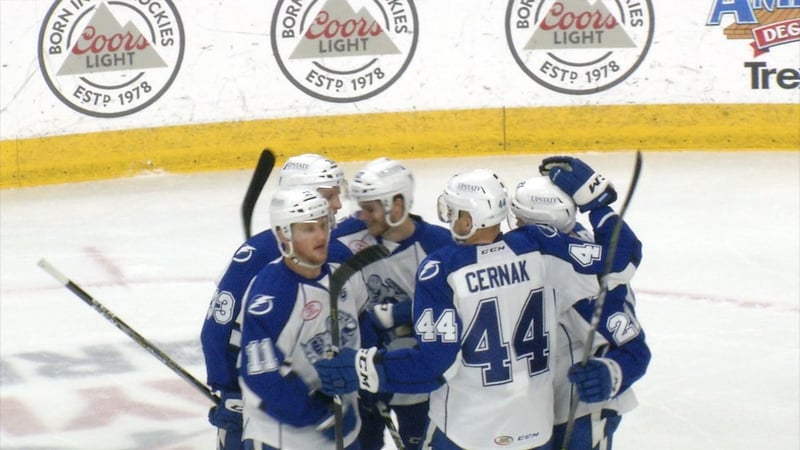 For the second game in a row, the Binghamton Devils were unable to score in a 5-0 loss, this time to the visiting Syracuse Crunch in front of 4,256 fans at Floyd L. Maines Veterans Memorial Arena on Sunday night.

Matthew Peca put the Crunch up 1-0 with 4:42 left in the first period after forcing a turnover in front of the Devils bench. Carter Verhaeghe tapped the puck to Peca after the turnover and he let a shot go from the right circle that beat goaltender Mackenzie Blackwood under the arm for the lead. The goal was Peca’s seventh of the year and team-leading 26th point and the Crunch took a one-goal lead into the first intermission and a 17-10 shot advantage.

After no scoring in the second period, Syracuse added four goals in the third period for a 5-0 victory. Mitchell Stephens scored his first of the night and seventh of the year on the side of the net as he lifted the shot over the right shoulder of Blackwood for the 2-0 lead 2:25 into the third.

Alexander Volkov scored two straight to put the Crunch out to a 4-0 advantage at 6:31 of the third period and then on the power play, with 5:44 left in the game. The goals were Volkov’s ninth and 10th of the year with assists from Anthony Cirelli, Matt Bodie, Peca, and Jacob McBain.

Stephens cashed in on his second of the night and eighth of the year, unassisted, with 2:26 left in the game for the 5-0 lead and that was the final. Connor Ingram stopped all 29 shots he faced for the shutout win and Blackwood stopped 32 of 37 in the loss.

The Binghamton Devils return home Friday, January 5 against the Belleville Senators at 7:05 p.m. If the Devils win all fans will receive a FREE ticket to the January 10 game against Syracuse. Call the Devils’ front office at 607-733-7367 for more information.