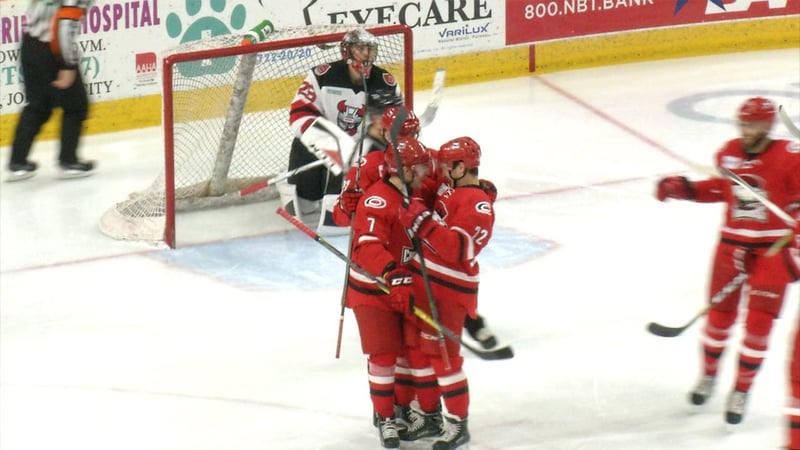 The Binghamton Devils gave up two goals in the first 2:22 of the game in a 7-1 loss to the visiting Charlotte Checkers on Saturday night at Floyd L. Maines Veterans Memorial Arena.

Charlotte scored two goals in 12 seconds to take a 2-0 lead less than three minutes into the game. Julien Gauthier took a shot from below the hash marks and beat goaltender Mackenzie Blackwood under his leg pads for his fourth of the season and a 1-0 lead at the 2:10 mark. Gauthier’s goal was assisted by Sergey Tolchinsky and Brenden Kichton.

Nick Schilkey fired in his fifth of the season by Blackwood just 12 seconds later to put the Checkers up 2-0. Helpers on Schilkey’s goal were handed out to Clark Bishop and Warren Foegele and Charlotte held a 2-0 lead after one period while outshooting Binghamton, 13-10.

Charlotte added three more goals in the second period to take a 5-0 lead and after the fifth goal, Ken Appleby replaced Blackwood in net for Binghamton. Andrew Poturalski, Gauthier, and Valentin Zykov all scored within the first 3:10 of the period for the five-goal lead.

Binghamton got on the board late in the second period to pull back within four goals. Tim Kennedy sent a pass through the low slot to Bracken Kearns and he tapped the puck by goaltender Alex Nedeljkovic for his fifth of the year from Kennedy and Nathan Bastian. After two, the Devils trailed 5-1 and were outshot, 23-16.

In the third period, Charlotte added two more goals for a six-goal advantage. Sergey Tolchinsky recorded his third of the year at 4:33 and Zykov added his second of the night and 12th of the year for the 7-1 lead at 11:04 of the final period. That score held as the final as Blackwood stopped 13 of 18 in the loss and Nedeljkovic stopped 20 of 21 for the victory.

The Binghamton Devils return home next Saturday against the Belleville Senators at 7:05 p.m. Call the Devils’ front office at 607-733-7367 for more information.