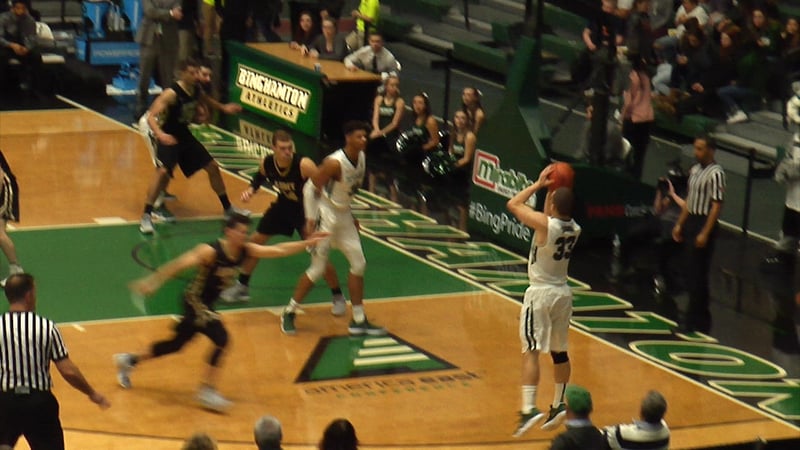 Binghamton men's basketball (6-4) held visiting Army 17 points under its scoring average and outlasted the Black Knights (5-3) 71-66 Wednesday night at Dr. Bai Lee Court at the Events Center. The win was BU's fifth consecutive - the longest streak in nine years and the program's longest non-conference win streak in its 17-year Division I tenure.

The Bearcats, now 4-0 at home, led throughout the game. But that margin wandered between four and nine points in the later stages of the second half and wasn't secure until BU made 6-of-8 free throws in the final 1:08.

Junior guard J.C. Show scored a game-high 16 points and backcourt mate Timmy Rose chipped in eight points in the final 7:42 (10 pts. overall) and played a stellar 38 minutes against unrelenting Army pressure. Rose drilled a big three-pointer that stretched a six point lead to nine, 61-52, with 4:24 left. Then up four with 1:05 left, Rose sank a pair of free throws to give the Bearcats some breathing room.

Junior center Thomas Bruce set the tone in a dominant first half that produced 10 points and five blocked shots. Bruce, who ranks fourth in the nation in blocks (3.3/game), wound up with 11 points, eight boards and a career-high six blocks.

Freshman guard Tyler Stewart chipped in season-high 12 points and seven rebounds - all but two points coming in the first half.

The Bearcats opened the game with a 17-7 run and shot 59 percent in the opening period to take a 38-34 lead into the locker room. Binghamton then scored the first six points of the second half to reach a double-digit lead. Army drew no closer than four points throughout the second half.