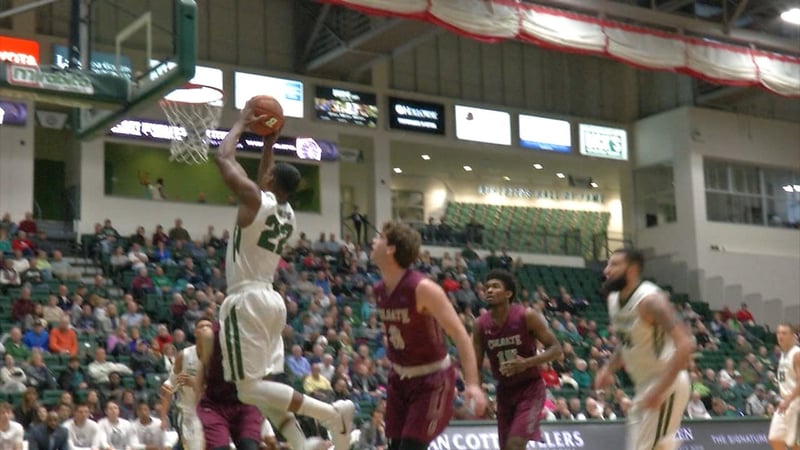 Binghamton men's basketball (5-4) carries a four-game win streak into Wednesday night's 7 p.m. tilt with visiting Army West Point (5-2). The Bearcats are a perfect 3-0 at home and enter their final stretch of six non-league games before America East play begins in one month.

The streak, BU's longest since the 2009-10 season, will be tested against a Black Knights team that scores 83 points game and is coming off a double-digit win over fellow America East member UMBC.

Last time out
• Binghamton rallied from a 13-point hole to overtake Colgate 76-65 on Saturday
• Junior center Thomas Bruce tallied his fifth double-double of the season with game-highs of 26 points (17 in second half) and 12 rebounds
• Junior guard J.C. Show (19 pts.) and senior forward Willie Rodriguez (16 pts.)
• BU shot 50 percent in second half and outscored Colgate 42-25
• BU extended its win streak to four games - longest since 2009-10 season

About Army West Point
• Return four starters and 15 lettermen from 13-19 squad of a year ago
• Averaging 83 points with four players in double figure scoring
• Shooting 49% as team, including 42% from three-point range
• Beat fellow America East member UMBC 81-70 on Friday and then beat Marist 82-75 in last game on Saturday to capture tournament title at The Citadel
• Picked to finish seventh (out of 10) in the Patriot League Preseason Poll

All-time series vs. Army West Point
Army owns an 8-2 lead in the all-time series and has won six straight games. The average margin of victory in those games has been 16 points. Last year at West Point, the Black Knights closed out the game with a decisive 11-3 run to win 71-60. The Bearcats missed four of their last five shots and had a pair of turnovers in the final 3:02. The game was tight throughout, especially in the second half, when the teams were separated by six points or fewer for most of the 20 minutes. Willie Rodriguez tallied his first double-double of the season and eighth of his career with team-highs of 18 points and 10 rebounds.

Bruce named America East Player of the Week
Junior center Thomas Bruce was selected as America East Player of the Week after averaging 20.0 points, 11.0 rebounds and 2.0 blocks during a 2-0 week. The 6-foot-9 center shot 74% from the field and 92% from the line and recorded back-to-back double-doubles. He was BU's first weekly honoree since teammate Bobby Ahearn won the award one year ago (Dec. 5). He punctuated his week with a 26-point, 12-rebound performance in BU's 76-65 win over Colgate on Saturday. In that game, Bruce hit 9-of-12 from the field and 8-of-9 from the line and helped the Bearcats stage a second-half rally with 17 points.

Show picking up steam
Junior guard J.C. Show is averaging 17.0 points on 51% shooting during BU's current four-game win streak. He has scored in double digits in eight of nine games.