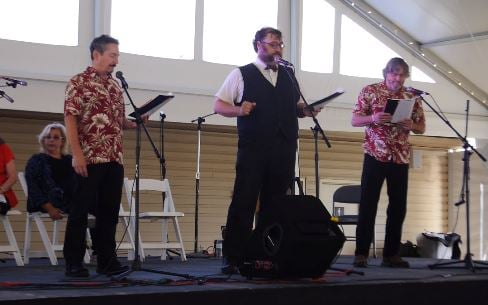 Around 200 people made their way to Traditions at the Glen for the first ever Comedy Music Festival. The event is inspired by the 100th radio show of KBKabaret.

Bree Harvey, Producer and Head writer of KBKabaret decided when she first started the show back in 2015, she would celebrate the 100th radio show episode live. The radio show currently airs every Saturday on WNBF. Over the past two years, Harvey has gained around 260,000 fans through her show and podcasts.

"Laughter is very important. It's a survival method for I think most writers and most song writers, anyone. You need that. Everyone needs to laugh and be happy. So this is what we're here for, to make the community uplifted, spiritually pleased and happy," said Harvey.

Harvey says this will be the first of many events to come in the future. All proceeds from the event will go to the Mental Health Association of the Southern Tier.

"I believe that everyone is touched by some sort of mental health issue, and comedy is there for you. Music is there for you. I hope this benefits anyone who's a little depressed. Start writing, start singing, I think that helps," said Bree Harvey.