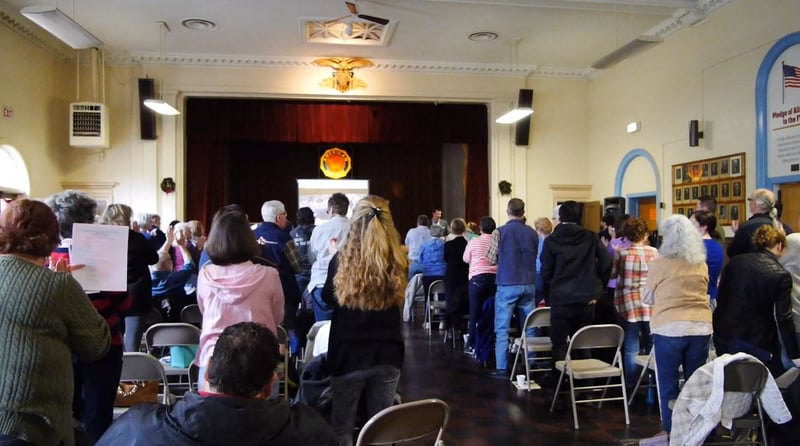 Members of Binghamton Indivisible and Citizen Action hosted a town hall meeting Saturday, to go over the agenda of the new health care bill that would repeal much of the Affordable Care Act.

Both groups extended the invite to Congresswoman Claudia Tenney, who hasn't held a town meeting since her election in November 2016. Despite promises both groups said she had made previously to hold a meeting, Tenney never showed.

The meeting attracted dozens, who gathered in the main hall of the American Legion Post 80 in Binghamton. The event focused heavily on Tenney's recent vote to strip the ACA of its provisions for guaranteed, affordable health insurance for the poor, elderly and those who have pre-existing conditions. However, most of the scrutiny came from her vote that cuts nearly $900 billion from medicaid and defunding Planned Parenthood. In response to numerous invites, Tenney claims she has received death threats by paid protesters.

Broome County Executive Jason Garnar was one of the speakers at the event. Josh Riley, former counsel to Senator Al Franken and Law Partner with Boies, Schiller and Flexner, spoke on the health care bill and broke down the many targets of the bill. Marita Florina, DNP for Lourdes Hospital spoke on behalf of what is to be expected when the new health care bill shifts into place. Debra Marcus, CEO of Family Planning of South Central New York, discussed how family planning would be directly affected by cutbacks. Nancy Hall, Social Security Disability Analyst, explained how people with pre-existing conditions would be affected by the bill.

"My own brother has juvenile diabetes and has had it since he was a child - that's considered a pre existing condition. He needs thousands of dollars of medication every month, just to live. With this new health care bill, that puts all of that in jeopardy, it puts his life in jeopardy." -Matt Wahila

The Congressional Budget Office, a non-partisan organization, estimated that 24 million people could lose those their coverage under the proposed plan.