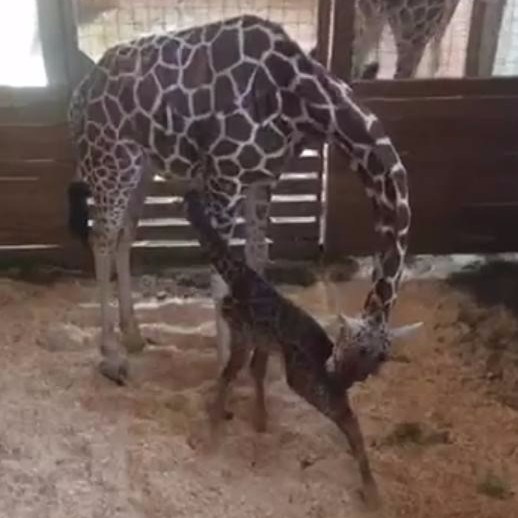 "We have a baby!" proclaimed Jordan Patch outside April the giraffe's pen at the Animal Adventure Park in Harpursville Saturday morning.

Patch and zoo staff realized April was in labor at about 7:20 a.m.  when they noticed the 15-year-old giraffe had developed a "balloon-like patch."

Patch hopped in his car, by the time he arrived, about 10 minutes later, a growing number of YouTube viewers were witnessing the first glimpse of April's baby -- its hooves.

Patch said about 1.2 million people watched the live-stream of April delivering her fourth calf at 9:53 a.m., which Patch described as being "absolutely perfect."

From there, Animal Adventure Park staff were waiting for the calf to take its first steps, expected within a half hour.

Four minutes into his interview with reporters, Patch got the news he had been expecting.

And how was Oliver through the delivery? Overall, not very into it, said Patch, although he did comfort April a few times.

Patch said the baby's gender will be announced through the text alert system later Saturday and announce details of a naming contest. Fox 40 has been in Harpursville, where fans have been arriving all day. Stay with us tonight at 10 p.m. for complete coverage.