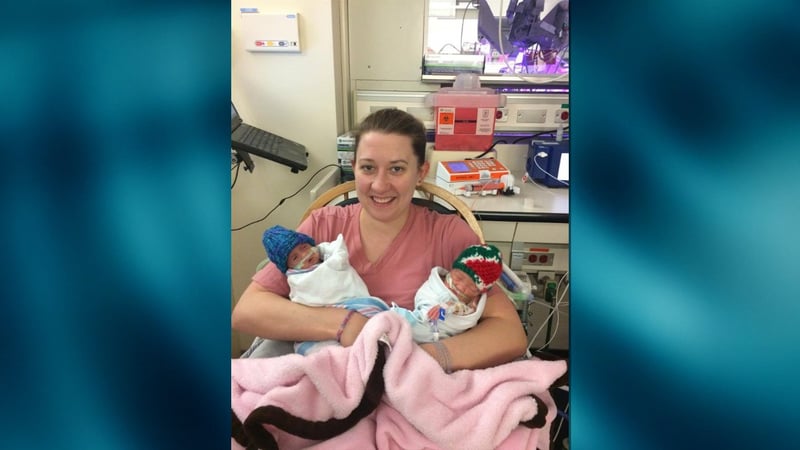 Community members are joining together to help raise money for a Binghamton family -- whose delivery of premature twins turned from a situation of horror into what they consider a miracle.

“Everything was going really well until Halloween night.  That's when I ran into problems with my water breaking," said Binghamton resident Tricia Steed.

This happened when Steed was just 23 weeks pregnant.  In early November, she was put on strict bed rest at Crouse Hospital in Syracuse for early labor symptoms.

Things were going okay at the hospital until Steed started having contractions again on November 30th.  She was given enough pain medication to help her get sleep.  On the morning of December 1st, her husband Chris woke to find a nightmare situation.

"She wasn’t breathing right.  When I turned on the light and I tried to wake her up, I could tell that she was having a seizure,” said Chris Steed.

Chris called for the hospital's nurses.  The situation demanded an emergency C-section -- about three months before the Steeds' identical daughters Alva (or Ally) and Della were due.

“Right when they started to take the girls out with the C-section, my heart stopped.  So they did CPR, and they got my heart back.  They sent me to the ICU (Intensive Care Unit), and my heart stopped again.  And that’s when they decided to put me on the ECMO machine -- which is basically a form of heart by-pass machine,” said Tricia Steed.

The machine would help in saving her life.

“At one point there was a very good possibility that I could have lost all three of them,” said Chris Steed.

Tricia said the cause for this alarming situation was determined to be saddle pulmonary embolism.  She said this is basically a blood clot in the chest that branches into the lungs. Steed is currently on blood thinners and it will take time to determine whether the blood clot formed from a hereditary issue or as part of an increased blood volume from having twins.  Her left leg is currently numb and she will soon have surgery on her right leg for a blood clot in her artery.

Overall, Tricia and the girls are doing better.  Alva has come home, while Della is currently in Wilson Hospital's intensive care unit for babies.

"She’s doing really well.  The only reason she’s still in the NICU is because she requires oxygen and they’re trying to ween her down off of that,” said Tricia Steed.

Steed said Della also faces problems with low blood levels and might need surgery for bleeding in her eye.

The Steeds said while the scariest part is now over, there are still staggering medical expenses.

“We'll chisel away at it little by little.  And we got two miracles, well three miracles, me and my girls -- and our hero,” said Steed pointing to her husband.

Friends and family of the Steeds are hosting a fundraiser open to the public this Sunday, Feb. 26th, from noon to 6:00 p.m. at the Old Union Hotel (246 Clinton St., Binghamton) -- to help with expenses including medical bills and formula (with her complications, Steed is unable to breastfeed).  Admission is $10.00 a person.  Children five and under are free. The event will feature food, live music and raffles.

A GoFundMe page has also been set up -- and gives more details on this family's story.