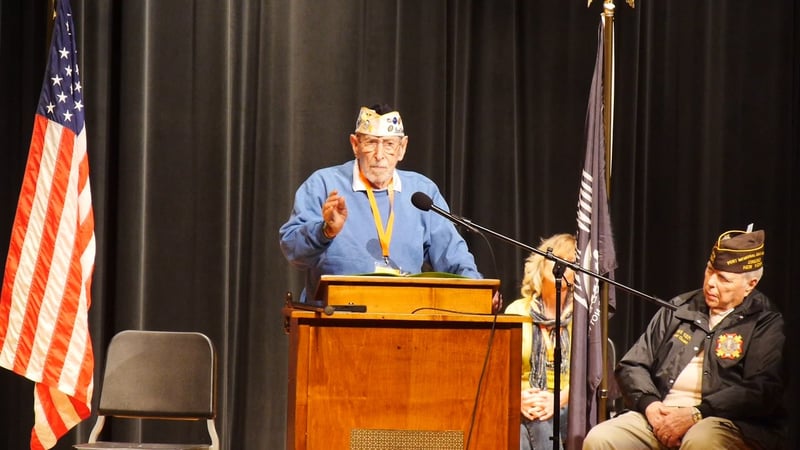 On December 7th 1941, 20-year-old Bill Kennedy of Owego, NY had enlisted in the United States Air Force and was stationed in Hawaii. He had no idea he was about to live a part of history.

Kennedy describes the confusion and chaos after the first bombs hit the ground.

"Somebody hollered "Japs!" and everybody scattered," remembers Kennedy, "But how do you scatter twenty-six hundred guys?"

With what shelter they had being blown to pieces by the air strike, Kennedy says there were few places to hide. Many took cover in a transformer building.

Unable to get inside the jammed space, Kennedy braced himself in the open. He says the Japanese were striking down anything that moved.

"These airplanes coming. High level bombers and you see five bombs coming," says Kennedy, "But they missed us."

"Two buildings survived and so did we." Mr. Bill Kennedy describes the aftermath of Pearl Harbor.

Others weren't nearly as fortunate. Kennedy says between raids a lot of the Americans ran back into the barracks. Those barracks were immediately bombed, leaving only two buildings standing and few survivors.

Wiped out a lot of guys who didn't even know they were coming.

2,403 Americans were killed at Pearl Harbor. Bill Kennedy is one of the lucky ones.

"I have no animosity for Japan right now. I even for a while bought a Honda," laughs Kennedy.

After Pearl Harbor, Kennedy went on to become a pilot. At 95-years-old, he is the last remaining survivor of Pearl Harbor in Tioga County.