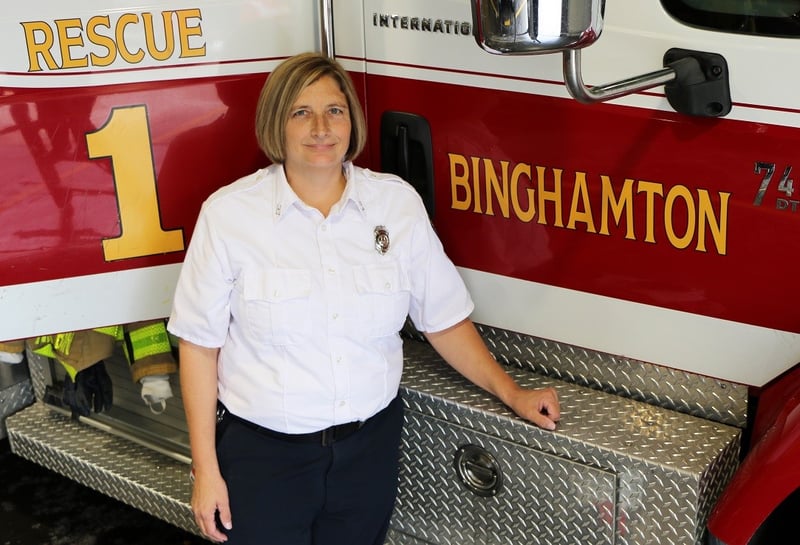 “In the Binghamton Fire Department’s 149-year history, there has never been a female serving in this high-ranking position,” said Mayor David. “Capt. Broderick’s experience in firefighting and EMS operations made her a perfect fit for a leadership post. While firefighting is not typically a profession that attracts female recruits, Capt. Broderick has proved to be a role model for young women seeking careers in emergency services and beyond.”

Capt. Broderick, 48, of Port Crane, was hired as a firefighter in 2001 and was promoted to Lieutenant in 2012. She has been a member of the Haz-Mat Team since 2010 and served as an EMS Instructor from 2011 to 2015. Prior to being appointed as a Binghamton Firefighter, Broderick served as a paramedic and in leadership positions for the Broome Volunteer Emergency Squad and as a paramedic for the Union Volunteer Emergency Squad.

“I appreciate Mayor David and Chief Eggleston for their support and confidence in me with this promotion,” said Capt. Broderick. “With more than 25 years of emergency services experience, I hope to bring a unique set of management and training skills to the position. We have a strong department and I hope to make it even stronger.”

In addition to her role as Captain, Broderick will also serve as EMS Coordinator for the Binghamton Fire Department. The position pays $77,311 annually.

“During Christina’s 15 years as a Binghamton Firefighter and a Lieutenant, she has always done an outstanding job and has earned the respect of her fellow firefighters,” said Fire Chief Daniel Eggleston. “I expect her to continue along that same path in her new position as Captain.”